Here's a robot we built together

I have been dithering around the computer keyboard for the last couple of nights not really sure what to post. It has been a long year and I am tired, like a lot of people out there I'm sure. My procrastination paid off though, because I came across a half drafted post from October that was never published. Perfect for my tired mind, a few tweaks and here it is... 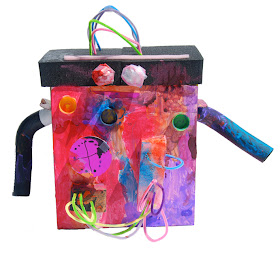 As part of lilla a's  Build a Robot exhibition Cakey and I built a robot, who Cakey named Juper. To make Juper we first went on a trip to Reverse Garbage (only useful if you live in Sydney) and came back with some fabulous (and cheap) materials to build our robot... in particular some large rubber pipes (that made robot arms) and pieces of thick foam that were perfect for poking pipe-cleaners in to create our robot's electrical wires.

Using loads of pva glue we stuck on the foam, bottle tops for buttons and knobs, some aluminium foil balls for eyes (completely covered in sticky tape of course) and a homemade clock.


We did discover to our annoyance that the foam would not stick with pva glue, it kept falling off as soon as anyone slightly knocked it. So I pulled out my dusty hot glue gun which I had to buy at graphic design school to be used throughout my course, but not once in my working life.

My hot glue gun is great – it sticks just about anything. It is one dangerous little device though, as it gets seriously hot (I still have the scars to prove it). Cakey stood back (she was a little scared of the hot glue gun) while I finally got those foam pieces to stay where we wanted them to. By this point I was totally sick of this project but Cakey wanted to make more and more robots so she made 'baby robot' out of an old plant pot, pipe-cleaners and a permanent marker.


And the next day Cakey painted Juper the 'mummy robot' in rainbow colours.


The beautiful thing about a robot is that it can look like anything. This is not a project that anyone can replicate. We were lucky to have the supplies from Reverse Garbage but you could use anything really which the exhibition at lilla a proves – what a wonderful array of different robots.

Also, have a look at this fabulous post from NurtureStore about making a junk model robot.

Linked to play academy and the sunday showcase

I would love it if you would leave me a comment.